Our ambition is to produce wines that let our vineyards speak for themselves, showing what their soil has to offer and knowing that will yield the greatest bottle we could hope to produce.

VINEYARD PROFILE
Hazy Mountain is our Estate Vineyard, currently with 35 acres under vine and growing. First planted in 2019, our dreams come true in this vineyard.

The south facing slopes range in elevation from 800 feet to 1,140 feet at the mountain’s crest. Soil varies throughout the vineyard from block to block, but at its core is a very rocky loam soil from parent rock, granite gneiss. The granite ranges from pebbles to boulders, with seemingly a mountain’s worth of quartz scattered throughout the hillsides.

Our steep vineyards are perfect for shedding water and producing the finest wines. Higher density planting of 3 feet between vines, 8-foot-wide rows, and tall posts gives us as much canopy as possible.

With the southern exposure, very rocky, well-drained soil, and excess of room for canopy to grow, we truly believe this site will blow away any doubts that the finest wines in the world can be produced right here in Virginia.
Shenandoah Valley AVA

VINEYARD PROFILE
Little North Mountain Vineyard is our production vineyard site in Swoope, Virginia: a small, rural community west of Staunton, on the southeast-facing slopes of the west side of the Shenandoah Valley.

Since our first planting in 2016, the vineyard has grown to 50 acres planted upon a beautiful terroir. The soil is made from the erosion of the Little North Mountain range at the foot of North Mountain, with its limestone rock flowing into our foothills. A limestone silt loam leaves a deep blanket across the vineyard that ranges in elevation from 1,550 to 1,700 feet.

The cooler valley climate has a wonderful diurnal temperature flux with warm days and cool nights, preserving our acid as the grapes ripen.

Wind blows constantly through this side of the valley and through the vineyard—we often think we should have considered being windmill farmers instead of grape growers, with how constant the gusts are. These gusts circulating through the vine canopy provide a far less humid site than Virginia grape growing has become accustomed to.

Our ambition is to show you the delicate notes that this balance of terroir offers through the beautiful wines it produces.

Luke grew up in Greensboro and the Shenandoah Valley; farming and working outdoors with his family, raising heritage breed pigs sold to restaurants throughout Virginia and Washington DC. Autumn Olive Farm pigs are raised outdoors in a mix of open pasture and hardwood forests, all in a way to give the animals a broad diet that has a tremendous influence that you can taste in the meat. This gave him his first understanding of terroir, or a sense of place coming out in the flavors and textures of a final product, and the time and process needed to pursue perfecting it. It was working in restaurants as a teen, that Luke’s interest in wine exploded, discovering that same sense of terroir found in food in wine. Summer of 2015, Luke worked in the Sierra Nevada foothills of Amador California in the cellar for his first vintage. From California, he returned to Virginia and spent a vintage in the cellar and vineyard in the Monticello AVA. In 2017, Luke joined the Hazy Mountain team and has been growing with it since. Since coming onboard with Hazy Mountain, Luke has had the opportunity to build relationships with our industry neighbors in the Monticello AVA, notably his mentor and consultant, Matthieu Finot – King Family Vineyards Winemaker, and study with an established vineyard in New Zealand during their harvest season. With all this knowledge, Luke’s ambition is to let the terroir of Hazy Mountain’s two vineyards in the Monticello and Shenandoah Valley AVAs be unmistakable in each glass we produce.

John-Mark is from the Shenandoah Valley. He grew up with a passion for agriculture and the outdoors. John-Mark is 2019 graduate from Bridgewater College. He chose the Virginia wine industry because of the challenge and opportunity to broaden his skills. His journey with Hazy Mountain started in 2018.  Since coming onboard with Hazy Mountain, John-Mark has been an instrumental member of the management team, taking ownership of the viticultural challenges in managing vineyards of different American Viticultural Areas -- the Swoope vineyard, Little North Mountain Vineyard, in the Shenandoah Valley AVA and the Afton vineyard, Hazy Mountain’s Estate Vineyard in the Monticello AVA.  Outside of work, John-Mark enjoys spending time with his family which includes his loving wife, Hannah, and their two dogs. One of his favorite wine and food pairings is a classic-- an open fire cooked rib eye and a bottle of Malbec. John-Mark is excited for the great possibilities of Virginia wine.

Liz Phifer has been in the hospitality business for over 30 years. Liz and her family live in Staunton, Virginia with her beautiful children Oliver, Julia and Garrett, and her Great Dane, Millie.  Liz is originally from New Orleans and has a passion for food, craft beer and wine.  Since coming onboard with Hazy Mountain, Liz has been instrumental in the opening process for our Tasting Room.  With knowledge and “know how” of food safety and the beverage industry, she was able to help us successfully opening our Tasting Room in June 2021.  Hazy Mountain’s Tasting Room offers a full listing of Hazy Mountain wine and craft beer along with a light bites menu that has a little something for all our guests! Since opening, Liz has been busy developing our team, processes and customer service.  In her down time, Liz enjoys cooking, and entertaining for family and friends as often as possible.

Bryan Fernandez is a member of Hazy Mountain’s Cellar Team.  Bryan chose the Virginia wine industry as a new career and challenge for himself.  Bryan was eager to learn about the industry and excited about the opportunity to work with a start-up vineyard/winery! His journey with Hazy Mountain started in 2019.  Since coming onboard with Hazy Mountain, Bryan has been a versatile member of the team in every facet of production and operations!  Bryan has been involved in all stages of production; planting, vineyard maintenance, harvest, wine making and bottling.  Bryan’s experience with both vineyards-- the Swoope vineyard, Little North Mountain Vineyard, in the Shenandoah Valley AVA and the Afton vineyard, Hazy Mountain’s Estate Vineyard in the Monticello AVA has given him perspective to the varying terroir between the AVAs.  Bryan’s passion and primary role with Hazy is in our winery, where Bryan has the satisfying experience of seeing the harvest all the way through its final stages of production!  Bryan’s interest in all component of the industry didn’t halt at the bottling stage, Bryan has been an original member of Hazy Mountain’s Tasting Room team, interacting with new team members and our visitors here at the Tasting Room—sharing his knowledge from hands-on experiences.   Outside of work, Bryan enjoys spending time with family, the outdoors, trying new foods and cooking!  Bryan has two dogs, Joker and Canelo.  Bryan’s favorite pairing is a nice steak or pork chop with a great bottle of Cabernet Franc. 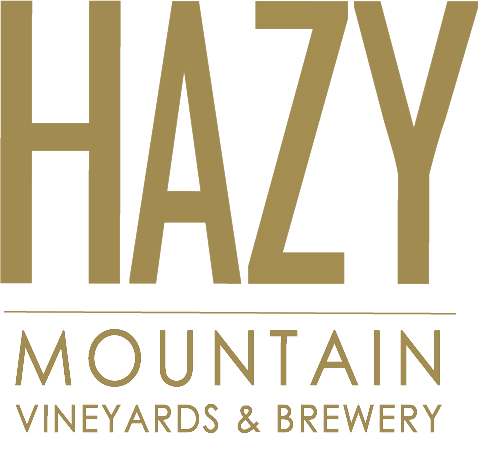